Bridges are more than only a way of connecting two destinations. They can be engineering or architectural marvels or true works of art. Discover the most beautiful European bridges: 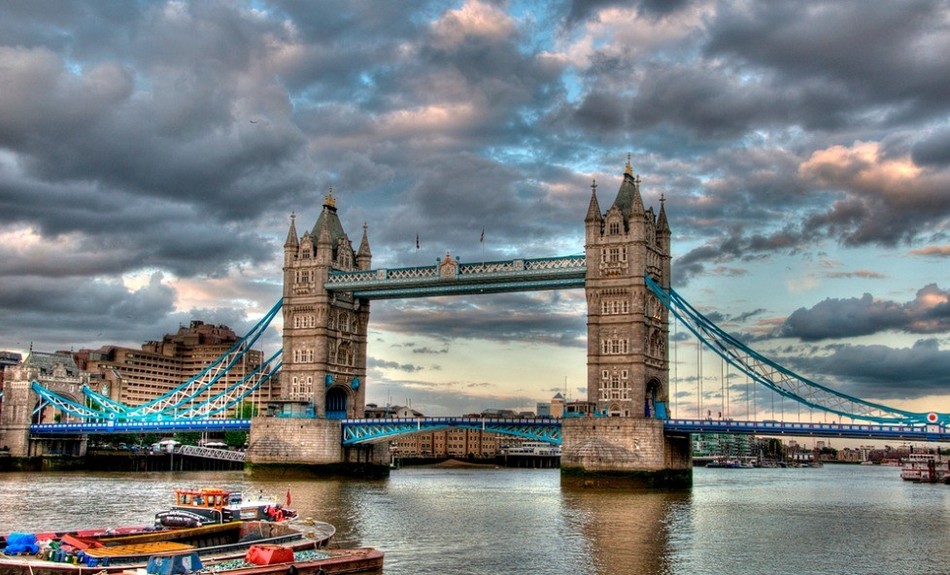 The Tower Bridge (London, UK) is one of London’s most recognisable landmarks. It was built between 1886 and 1894 and is a combined bascule and suspension bridge. The Tower Bridge is crossing the River Thames and it is close to the Tower of London. It is  a reminder of London’s rich Victorian history and a symbol of pride. 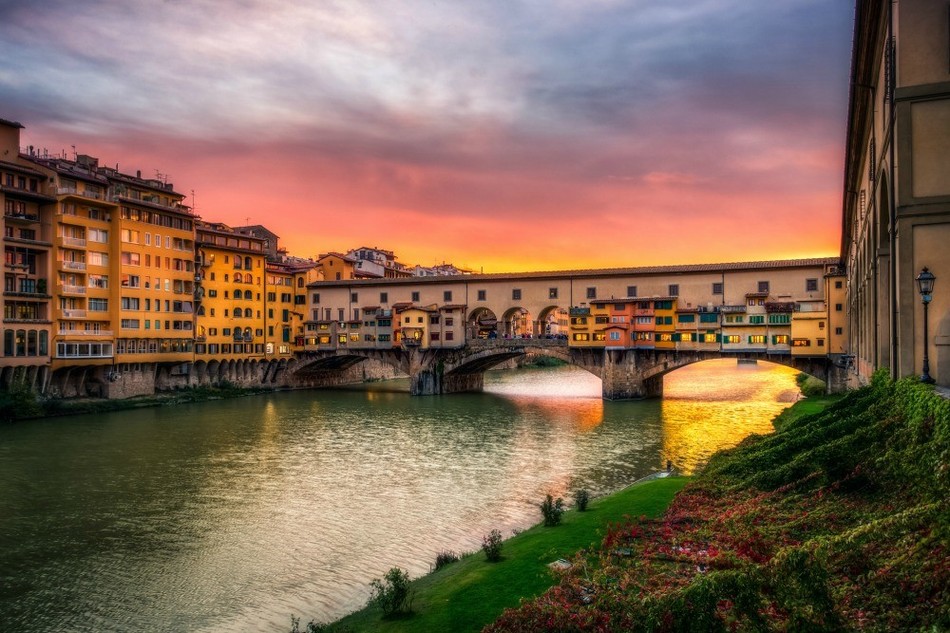 Ponte Vecchio (Florence, Italy) is crossing the Arno River and is an inhabited bridge, common thing in Europe during the Middle Ages when merchants and residences occupied the space. It was built in 1345 and has a secret Vasari Corridor which was used by Renaissance nobility to cross between the Pitti and Vecchio palaces. “The Ponte Vecchio is more than a bridge.  It is a street, a marketplace, a public square, and an enduring icon of Florence,” Dupré wrote. During the World War II, it was the only bridge in Florence exempted from destruction by German bombs. 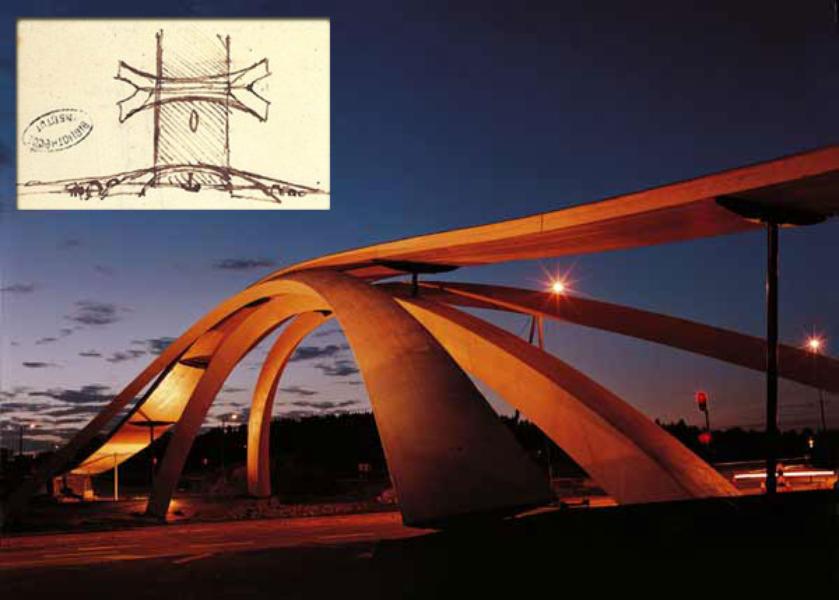 Leonardo’s „Golden Horn” Bridge (Aas, Norway) was designed in 1502 by Leonardo da Vinci with the purpose to traverse The Golden Horn, the Instanbul waterway which is separating Europe and Asia. But the stone bridge was never built because the Turkish sultan thought this was not technically possible. This footbridge is the version inspired by Leonardo da Vinci’s original plan. This bridge is the first civil engineering idea by Leonardo to be realized. “For 500 years the beauty and symbolism of this graceful bridge remained an obscure drawing in one of Leonardo’s notebooks, until it was brought into being in Norway in 2001 by the contemporary artist Vebjorn Sand”, according to the official website of The Leonardo Bridge Project. 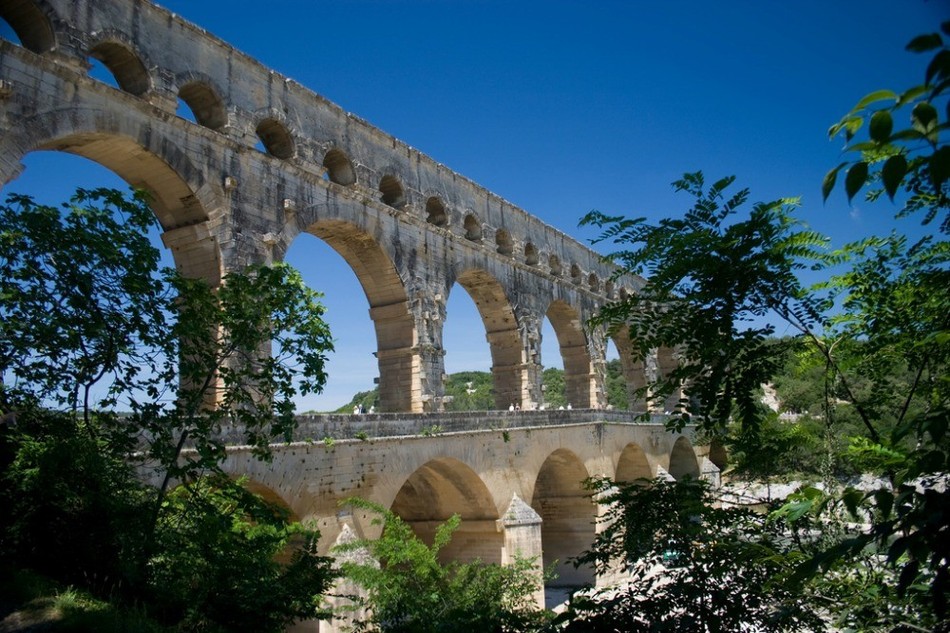 Pont du Gard (Remoulins, France) is part of the Nîmes aqueduct, a 50 km-long structure built by the Romans to carry water from a spring at Uzès to the Roman colony of Nemausus (Nîmes). Built in the 1st century AD, the Pont du Gard is the highest of all Roman aqueduct bridges and one of the best preserved. It is part of UNESCO’s list of World Heritage Sites. 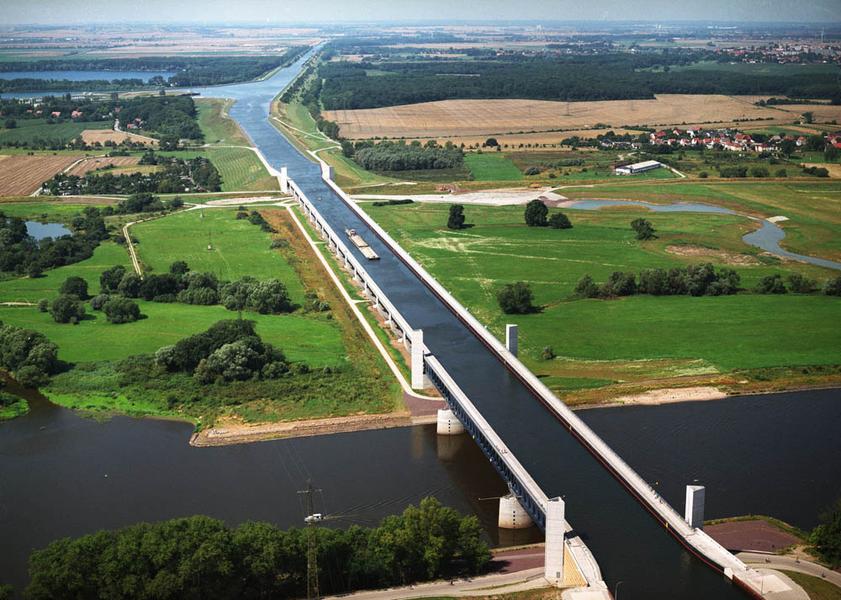 Magdeburg Water Bridge (Magdeburg, Germany) is actually a water bridge across water and is connecting East and West of Germany over the River Elbe. It is known to be the largest water bridge in Europe and the longest navigable aqueduct in the world. Its construction started in the 1930s, but was interrupted during the World War II. 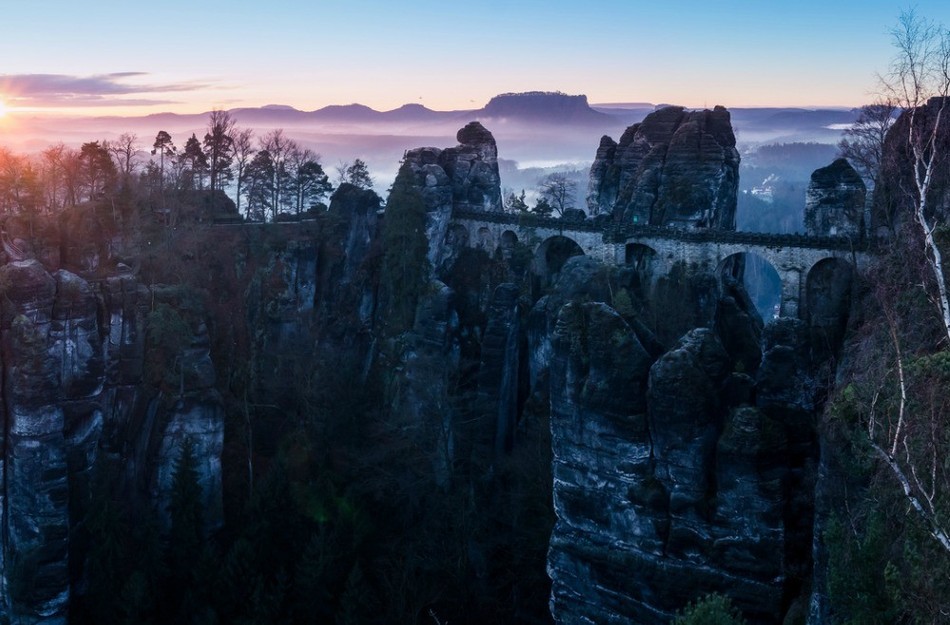 The Bastei Bridge (Lohmen, Germany) is a rock formation of 194 metres above the Elbe River. The jagged rocks were formed by water erosion 1 million years ago. The bridge is one of the main landmarks of Saxon Switzerland National Park. 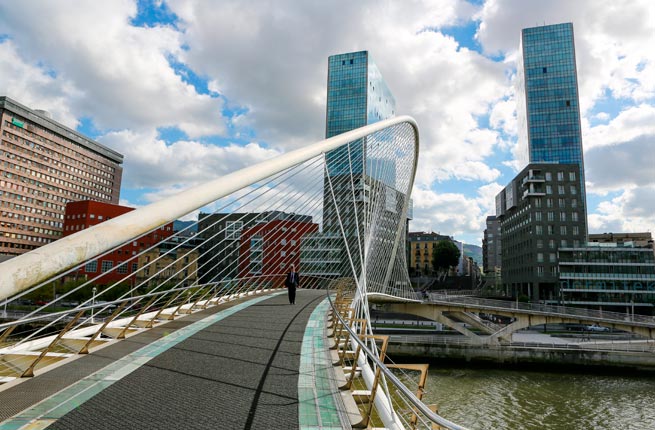 Zubizuri Bridge (Bilbao, Spain) means white bridge in Basque and is crossing the Nervion River. It features a glass deck that lights up at night.  It was designed by Santiago Calatrava and is open since 1997. 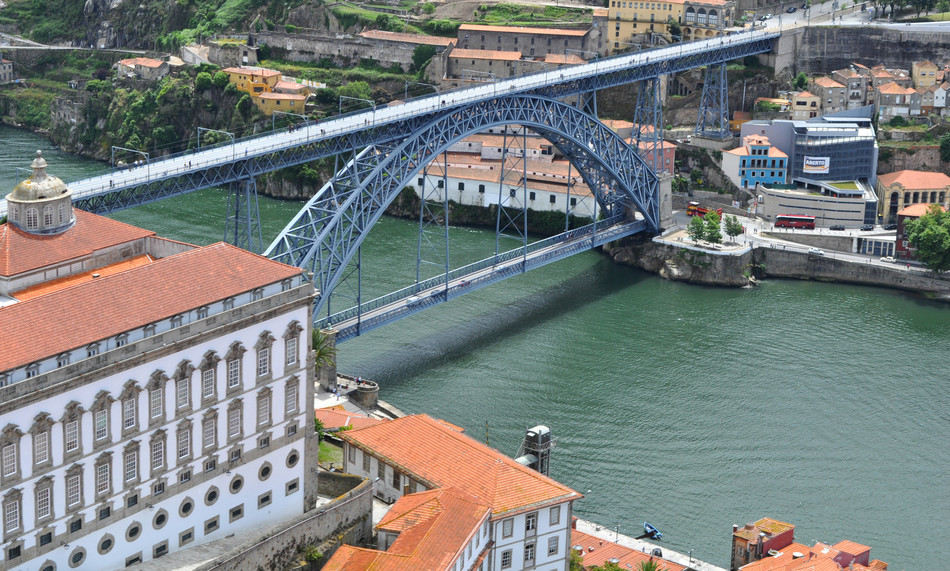 The Dom Luis 1 Bridge (Porto, Portugal)  is 395 meters long and 8 meters wide, and its arch is considered as the world’s biggest arch in forged iron. It was inaugurated in 1886 and it’s one of Porto’s emblems.

Ponte Sant’ Angelo (Rome, Italy) is one of the eight stone bridges that Romans have built over Tiber River between 200 B.C. and 260 A.D. “Much of Roman engineering genius is underwater, hidden from view, but their inventions—including the cofferdam, cutwater piers that divide water current, and pozzolano, a type of waterproof concrete—are still used today,” wrote Dupré. The name of Ponte Sant’ Angelo was chose for Hadrian which was the ruling emperor during the construction. 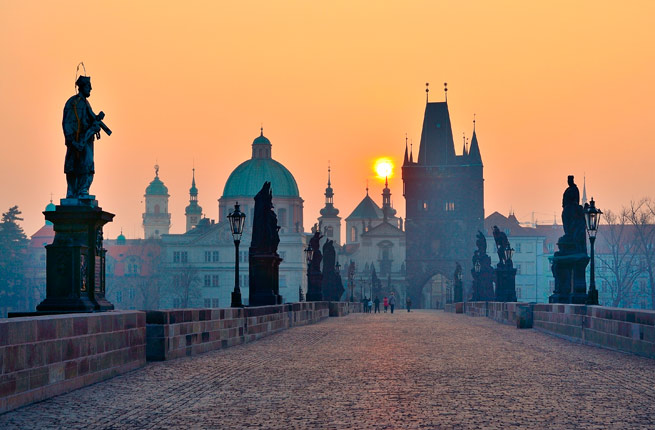 Charles Bridge (Prague, Czech Republic) is one of Czech Republic landmarks. It was built in 1357 by the order of Charles IV. The legend says it’s structure has a mixture of egg yolks, wine and milk for ensuring its strength.   If you enter on the Old Town side of the bridge, you can climb to the top of Old Town Bridge Tower for a better view of the bridge and its 30 statues lining the sides. 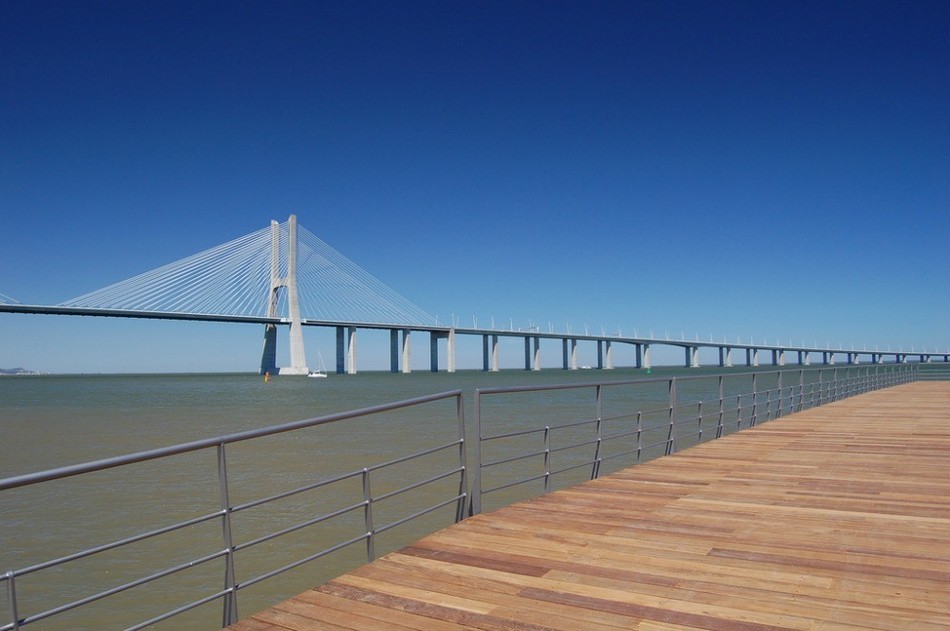 Vasco da Gama Bridge (Lisbon, Portugal) is the longest bridge in Europe (including viaducts), with a total length of 17.2 km. It was opened to traffic on March 29, 1998, when 500 years from Vasco da Gama’s discovery of the sea route from Europe to India were celebrated. 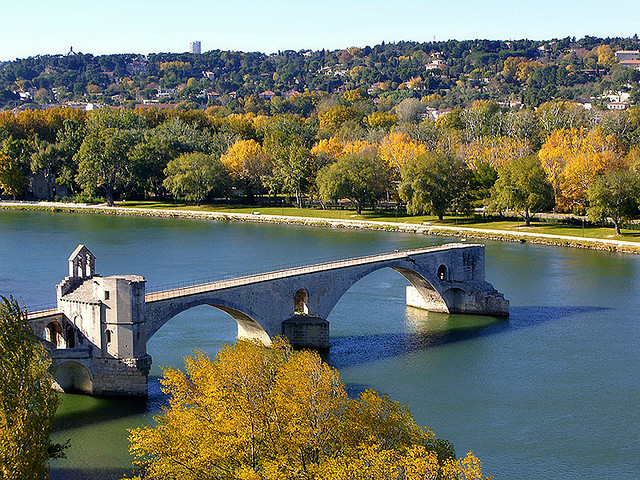 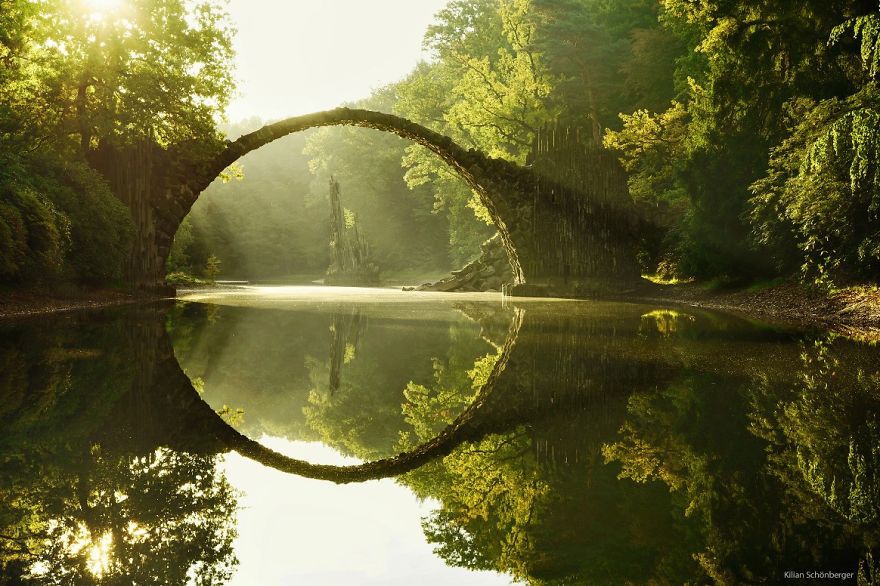 Rakotz Brucke (Kromlau, Germany) was built around 1860. The high canopy and the reflection in Rakotzsee River are forming a beautiful perfect circle. 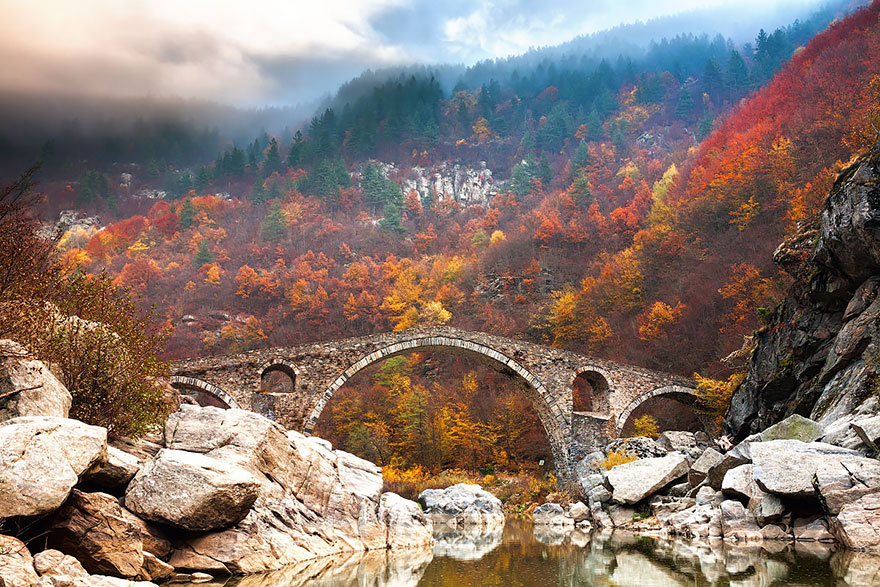 Devil’s Bridge (Rhodope Mountains, Bulgaria) or Dyavolski Most is an arch bridge over the Arda River. It was built between 1515 and 1518 by the Ottomans, connecting the lowlands of Thrace with the north Aegean Sea coast. It is the largest bridge of this kind in the Rhodopes and has holes with small semicircular arches to read water level. The bridge is proclaimed to be monument of culture. 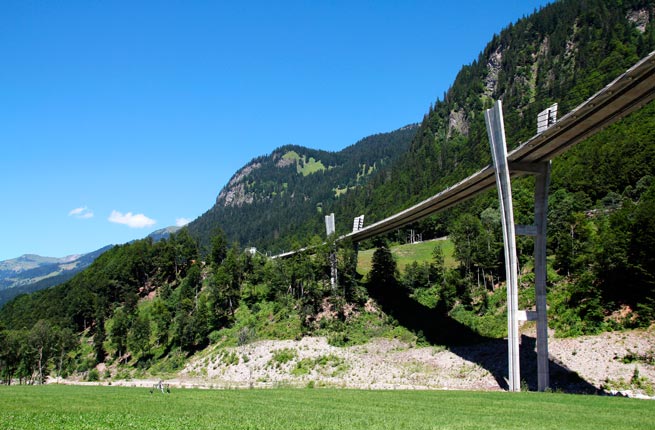 Sunniberg Bridge (Klosters, Switzerland) was designed by Christian Menn and is fitting very well in the Swiss Alps atmosphere. It is open since 2005 and the ceremony was performed by Prince Charles. 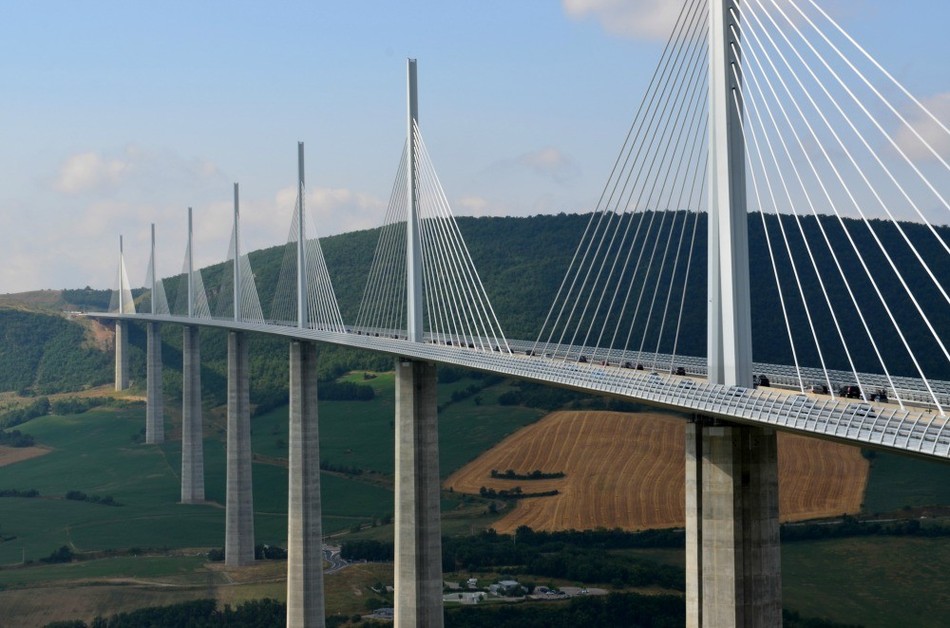 The Millau Viaduct (Millau, France)  is a cable-stayed bridge that spans the valley of the River Tarn, in southern France.It is considered to be the tallest bridge in the world with one mast’s summit at 343.0 metres above the base of the structure and the 12th highest bridge deck in the world, being 270 metres between the road deck and the ground below. It has the „delicacy of a butterfly” as it’s said in the news reports”. The English architect said that „A work of man must fuse with nature. The pillars had to look almost organic, like they had grown from the earth”. It is ranked as one of the great engineering achievements of all time. 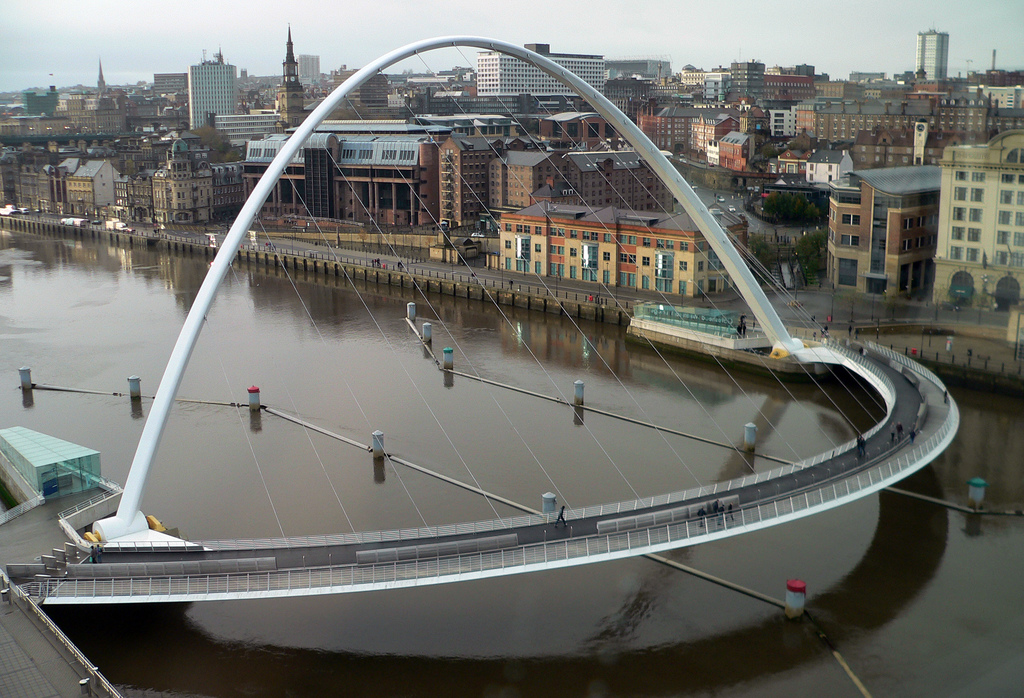 Gateshead Millennium Bridge (UK) was opened in 2000 and is a pedestrian footbridge across the River Tyne. It has a unique feature: it is rotating up to allow boats to pass under it. 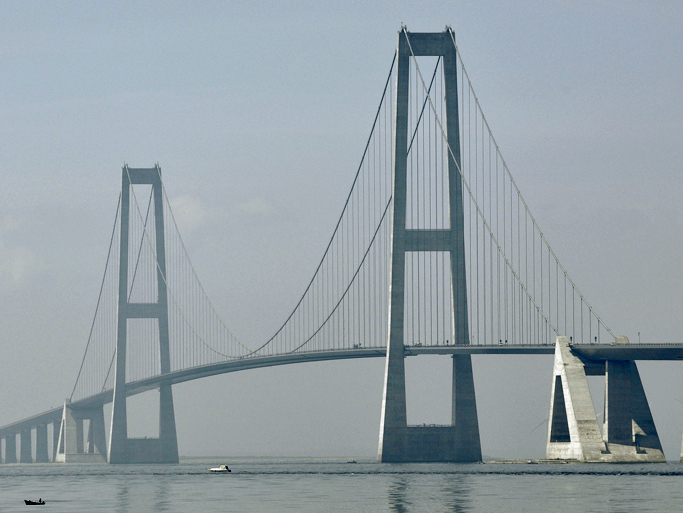 Great Belt Bridge (Zealand, Denmark) was opened in 1998 and runs between the Zealand and Funen islands. Its length is of 6,790 meters and the maximum height is of 254 meters. It is the third longest suspension span bridge in the world and the 8th tallest bridge in the world. 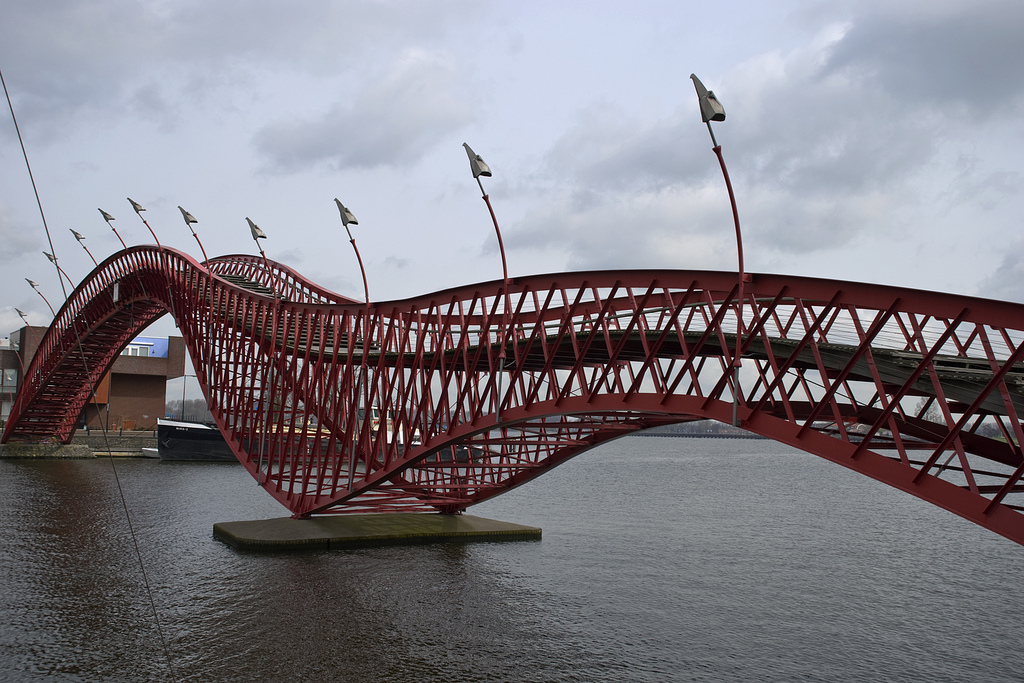 Python Bridge (Amsterdam, Netherlands) was built in 2001. It resembles a giant red snake. As you can see, the snake is decorated with aluminum seagulls. 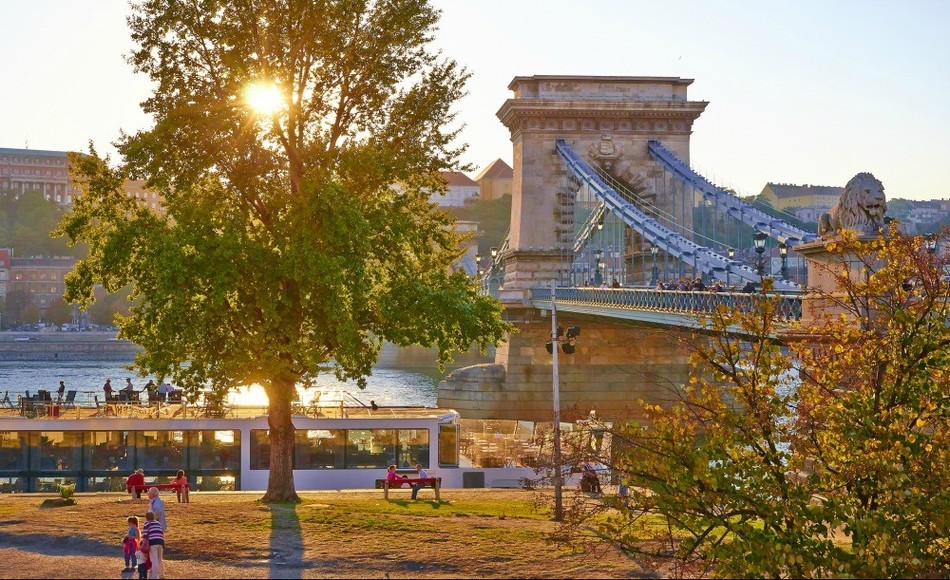 The Chain Bridge (Budapest, Hungary) or Széchenyi Chain Bridge was open in 1849 and is a suspension bridge that spans the River Danube between Buda and Pest, the two sides of Budapest. This was the first permanent bridge across the Danube River in Hungary. Stone lions are greeting visitors on each side of the entrance together with the Hungarian coat of arms. During World War II, the Chain Bridge was completely destroyed by German bombs, leaving only the pillars behind, making it one of two surviving bridges designed by William Clark. The structure was rebuilt starting in 1947 and provides stunning views of the beautiful building of the Parliament. 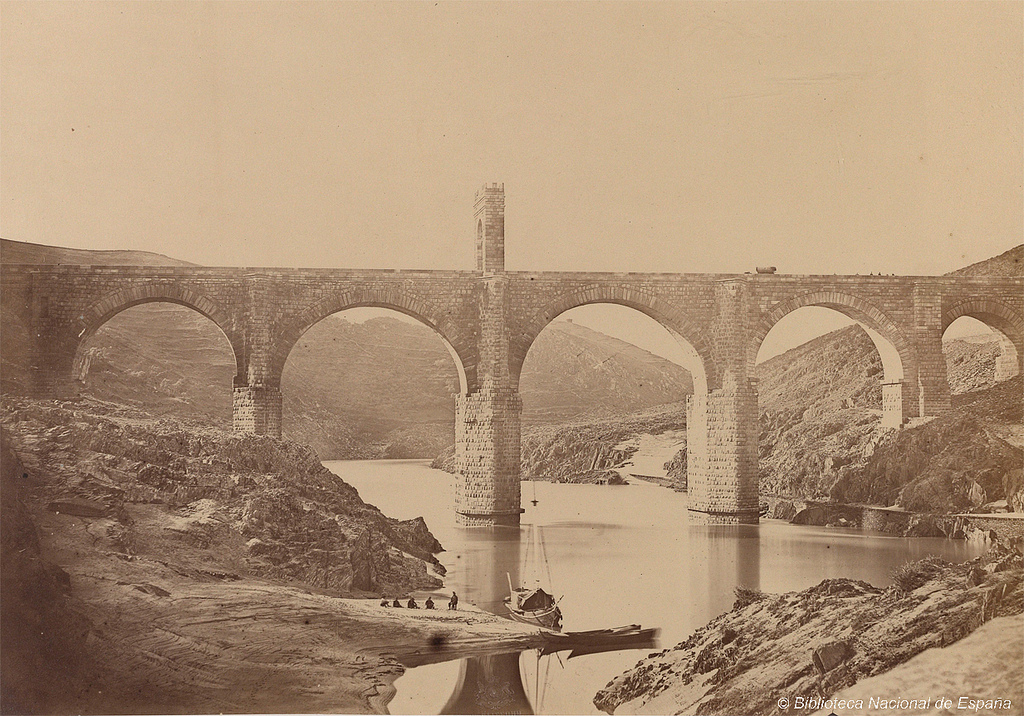 Puente Trajan (Alcántara, Spain) is a stone bridge built by the Roman emperor Trajan between the years 104 and 106 A.D. The Latin inscription on its archway states: „I have built a bridge which will last forever”. 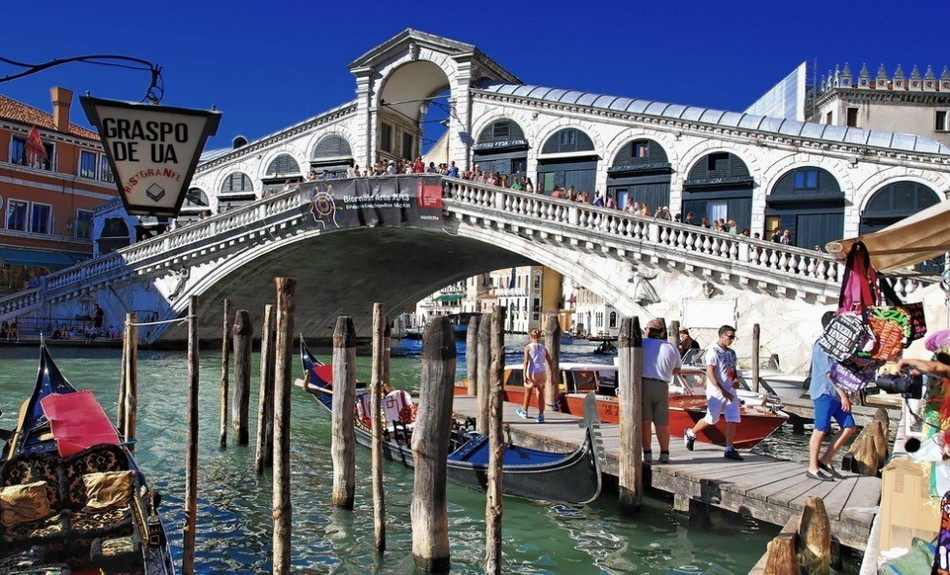 Rialto Bridge (Venice, Italy) is one of the four bridges crossing the Grand Canal. This one is the oldest and used to be the dividing line for the districts of San Marco and San Polo. Its unique arched shape and the white stones make it an attractive addition to one of the most romantic cities on earth. 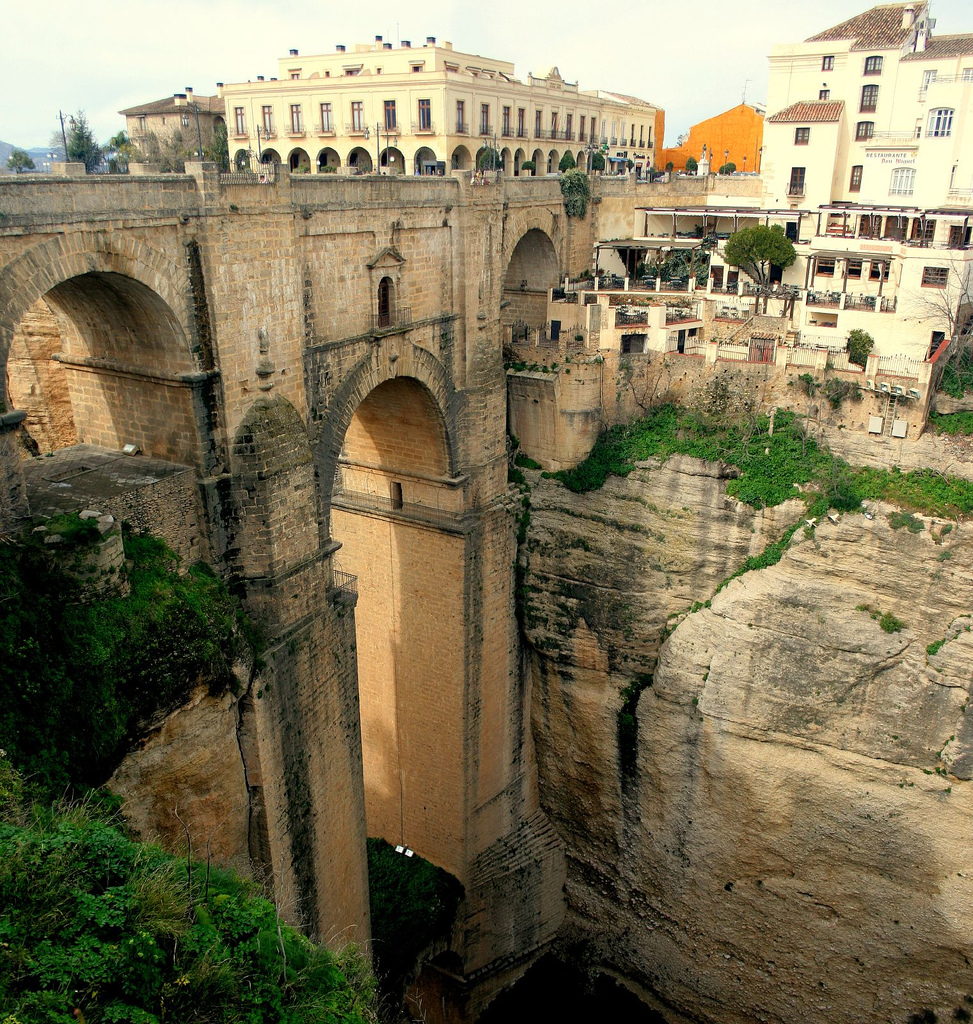 Puente Nuevo Bridge (Ronda, Spain) is the symbol and soul of the city. There were two ideas in order to build this bridge. The first was thought in 1735 by king Philip V, consisting of a 35 metres diameter arch, and whose works finished only 8 months later. 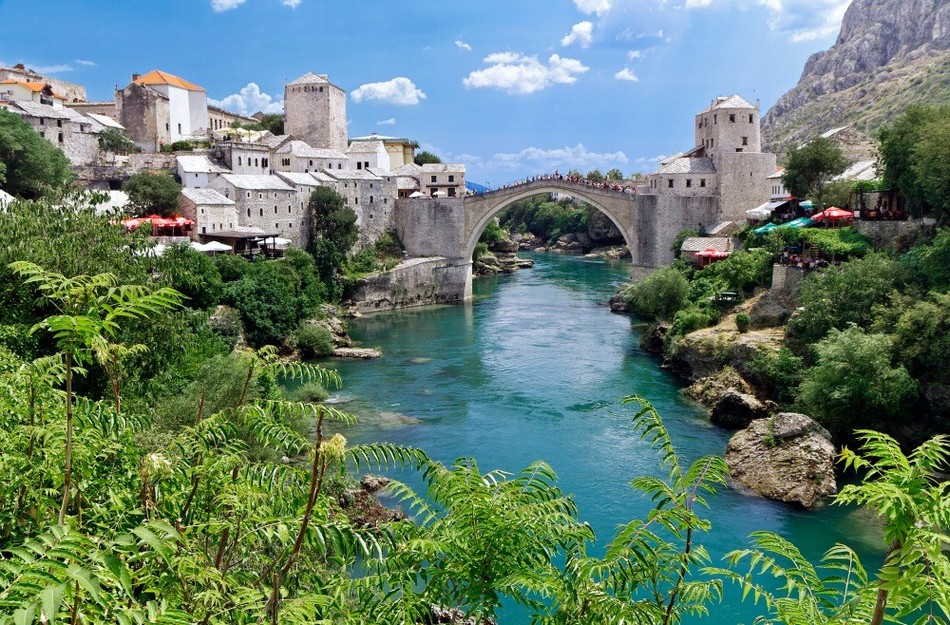 Stari Most (Mostar, Bosnia and Herzegovina) or The Old Bridge is one of the country’s most recognizable landmarks and is considered to be one of the most exemplary pieces of Islamic architecture in the Balkans. It is a reconstruction of the 16th century Ottoman bridge. It spans Neretva River, connecting the two parts of the city. It stood still for 427 years, until it was destroyed by Croat forces during the Croat–Bosniak War in 1993. 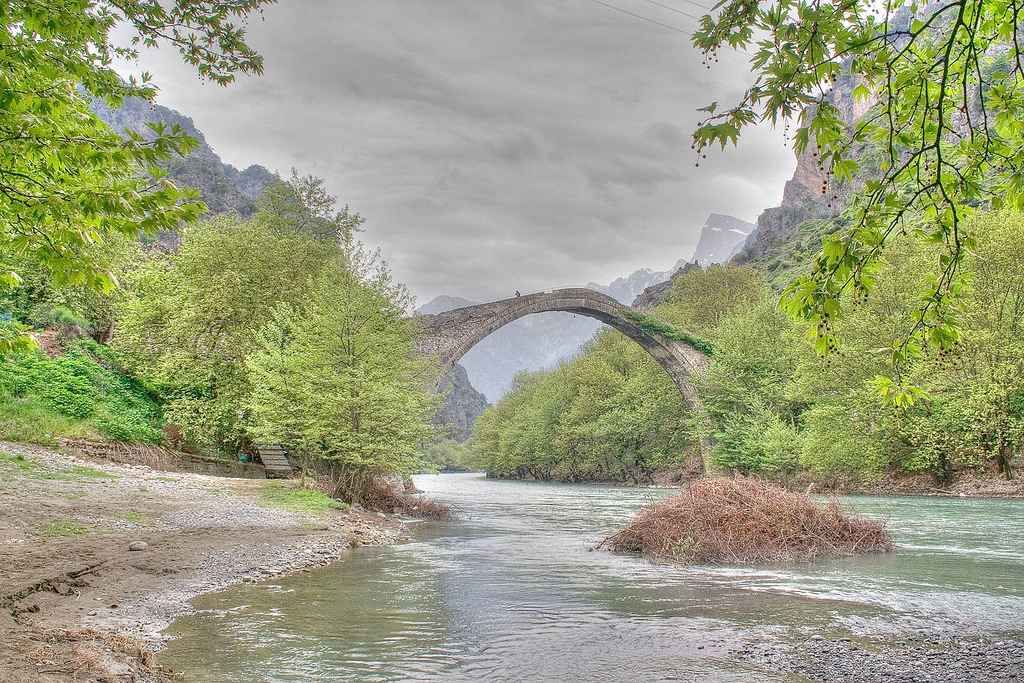 Konitsa Bridge (Pyrsogianni, Greece) was built by Ziogas Frontzos from the nearby village of Pyrsogianni. The legend says that when the architects who had previously tried unsuccessfully to build the bridge asked him where he had studied bridge building, he proudly replied: „In the University of Pyrsogianni!”.